In the deterrence theory of nuclear war, the “triad” is an essential concept. It refers to three different delivery platforms for thermonuclear weapons.

In a typical scenario, the United States is attacked by incoming thermonuclear weapons. The land based missiles are destroyed. Many strategic bombers are caught on the ground and also destroyed.  Those bombers that are heading to their targets are shot out of the air.

Still, the SLBMs will be launched, and that force alone is enough to completely destroy the attacker, no matter how large they are.

As a result, any attacker is assured that if they attack, then they definitely will be destroyed also.  This is the basis for nuclear deterrence, and the basis for the world’s peace that we have enjoyed since the beginning of the nuclear age.

Since 9/11, the United States has made a very large investment in national security.  It has prepared not only for fighting terrorism overseas, but also for fighting it inside the United States.  This has resulted in a blurring of responsibilities between more than 3,984 federal, state and local organizations that are involved in anti-terrorist activities. Doing the math, that is more than 76 anti-terrorist organizations per state.

By taking out a small subset of these organizations, we can see the organizations involved with cyber security and cyber warfare. See Figure 1. 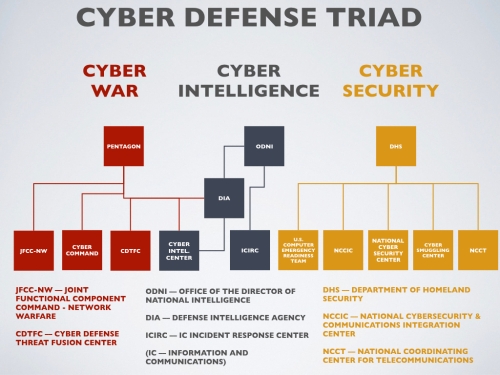 One of the peculiar problems of cyber defense is the blurring of national borders. It is actually almost meaningless to think of a national border.  So in a sense, the dividing up of responsibilities between the Department of Defense and Homeland Security is archaic. You will notice that no such division exists in Russia.  (See previous post on Russian Cyber Defense Doctrine.)

But looking at this complex web of cyber defense capabilities, one wonders how well it will really work when under extreme pressure of a major cyber incident?

It is an open question regarding whether or not the cyber capabilities that have been deployed by the United States are capable of cyber deterrence. Given the massive number of cyber attacks that have been reported, the answer is “no”.